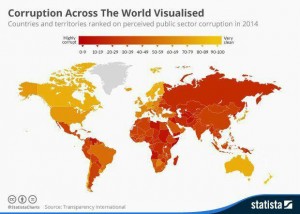 This chart shows countries and territories ranked on perceived public sector corruption in 2014.

Poorly equipped schools, counterfit medicine and elections decided by bribes are just some of the consequences of public sector corruption. According to Transparency International, nowhere on earth is deemed totally free of corruption. Somalia and North Korea in particular stand out on this map – both scored only 8 out of a potential perfect score of 100. Denmark, New Zealand, Finland and Sweden were rated the least corrupt nations worldwide, according to Transparency International.